Part of college is finding what it is that  “makes you tick.”

Growing up as a first-generation student can be difficult. Most grow up in a  low-income household and have to go through situations that can be hard and stressful. Some students have to work from an early age or just simply find someway to help our parents have enough money for necessities.

I interviewed two current Cal Poly students and one Cal Poly Alumni, now faculty member, and asked them how it was like for them to grow up.

Carla Quinonez moved to the U.S. about six years ago and is now a biomedical engineering major. Maria Arvizu-Rodriguez, worked in the agricultural fields with her parents and is now an academic advisor. Dainy Cruz Cortes grew up at her parents work, a sewing factory, and is now a business major.

Hear how it was like growing up for them.

Going away from home for the first time is a big step in life. It takes a good reason to do it. For first-generation students and many other college students that reason is college. Some students choose to stay close and go to college near their home or commute. But others have to travel miles to a new city with new people, places and surroundings. It is saying goodbye to everything they have ever known. But it’s worth it because they are going away to pursue and education.

END_OF_DOCUMENT_TOKEN_TO_BE_REPLACED

College can be a scary and confusing place. Having a support system on campus is important. At Cal Poly San Luis Obispo and at every other California State University there is the Educational Opportunity Program (EOP). EOP is under Cal Poly’s Student Academic Services which provides educational resources to students that can help them succeed.Students can apply for EOP after they finish applying to the CSU(s) (including Cal Poly SLO) of their choice . Part of the criteria to be eligible for EOP is to be an “educational disadvantaged student” or first-generation student and be low-income.

Once a student is accepted into the EOP program then they become connected with their EOP advisor. It helps them transition from high school to college and gives them support throughout their college years. There are six advisors, one for each college at Cal Poly.  The slideshow below gives an insight look at a day in Cal Poly’s EOP offices.

Click on the first picture to start the slideshow.

Advisors can be found at the EOP offices in Hillcrest, Building 81. Hillcrest is also the home for the offices of the other Student Academic Services programs on campus. Photo by Melissa Nunez.

In the lobby, there are brochures for students to take. The brochures give information about the EOP academic advisors and programs within SAS. Photo by Melissa Nunez. 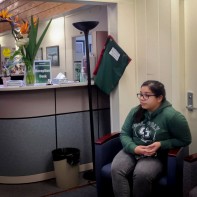 Mayte Solis, EOP Academic Advisor for the College of Math and Science getting some work done before she sees students during her office hours. Photo by Melissa Nunez.

Jose Millan, EOP Academic Advisor for the College of Engineering, listening to first-year student Sarah Thomas talk about how her quarter is going so far. Photo by Melissa Nunez. 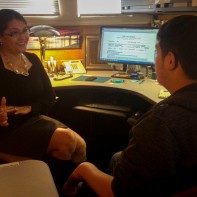 Sarah Clarke, EOP Academic Advisor for the College of Architecture and Environmental Design, takes a minute away from working and waiting for students during her office hours. Photo by Melissa Nunez.

Finishing up her office hours, Katie Ellis, EOP Academic Advisor for the College of Liberal Arts, ends her workday by checking her email. Photo by Melissa Nunez.

“We want to ensure that the student does not just get admitted but are successful so they are able to obtain their degree. As advisors we really care about our students we want to ensure that they are utilizing us not just for academic advising but sometimes if there’s personal issues it’s always good for them to know that there will always be someone that will be able to listen to you” – Jose Millan, EOP Academic Advisor for the College of Engineering.

“As a first-generation student it is even harder because you don’t know what to expect so having someone you can come to with any question is the best part of EOP.” – Katie Ellis, EOP Academic Advisor for the College of Liberal Arts said.